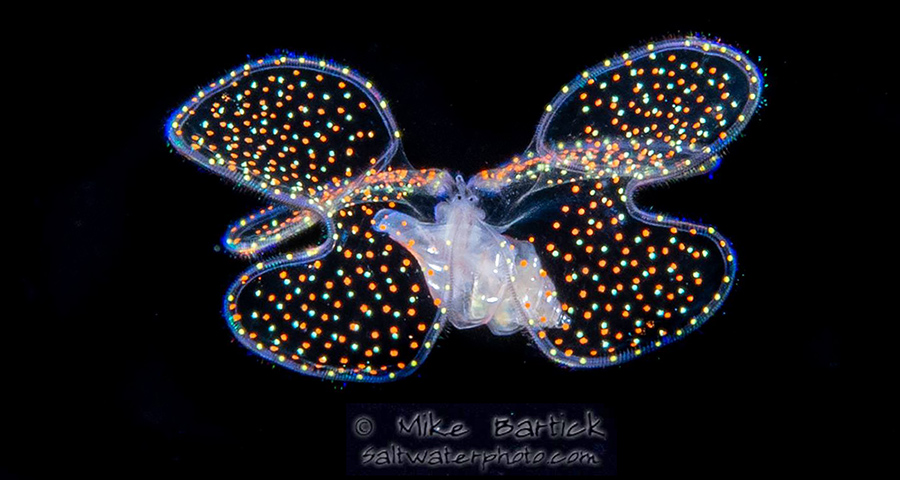 Blackwater diving is one of the most unique ways to explore our oceans. The dives are conducted at night and away from shore while using a specially designed lighted downline that drifts with the incoming tide. The bright downline lights are used to attract plankton and to give the divers a strong reference point while conducting the dives, allowing the divers to relax and enjoy this special experience. As the sun sets each night, the largest migration of animals on the planet begins, just offshore, in the form of plankton. These tiny creatures rise from the depths, disperse, and feed. Following the plankton are the things that feed on the them. Squid, Octopus, Paper Nautilus and fish larvae are all target photo subjects on these late-night blackwater dive excursions. The photos below will give you an idea of the wonders you may see and photograph while blackwater diving.


Double-ended Pipefish Larva -- This double-ended pipefish larva resembles sea grass when curled up, drifting along on the gentle night current. Responding to our lights, the pipefish opens itself to feed on the smaller mysid shrimp. Like other larval fish, pelagic development is a regular part of their lifecycle, remaining adrift until they have gained enough strength to settle on to the sand. 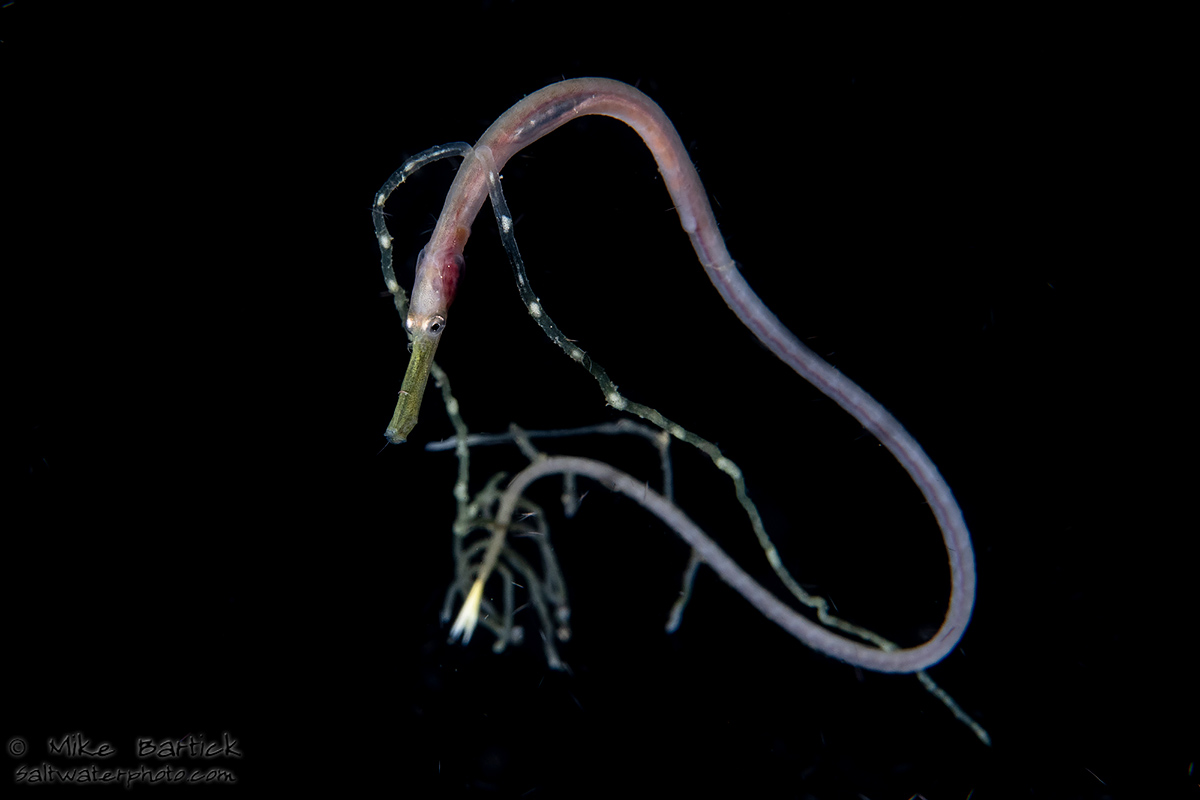 Jack and Jellyfish Symbiosis -- The unique symbiotic relationship between the Jackfish and the Jellyfish is a behavior that plays out for an unknown period of time.

The jack selects the jelly when they are both relatively small. As they grow, they help each other to survive. The Jack gains an immunity to the potent stinging cells of the jellyfish tentacles. Growing at different rates, the jellyfish will soon outsize its companion, but it won’t outgrow it. The jellyfish, actually has a flap just under its bell to accommodate and allow the Jack to rest when needed. 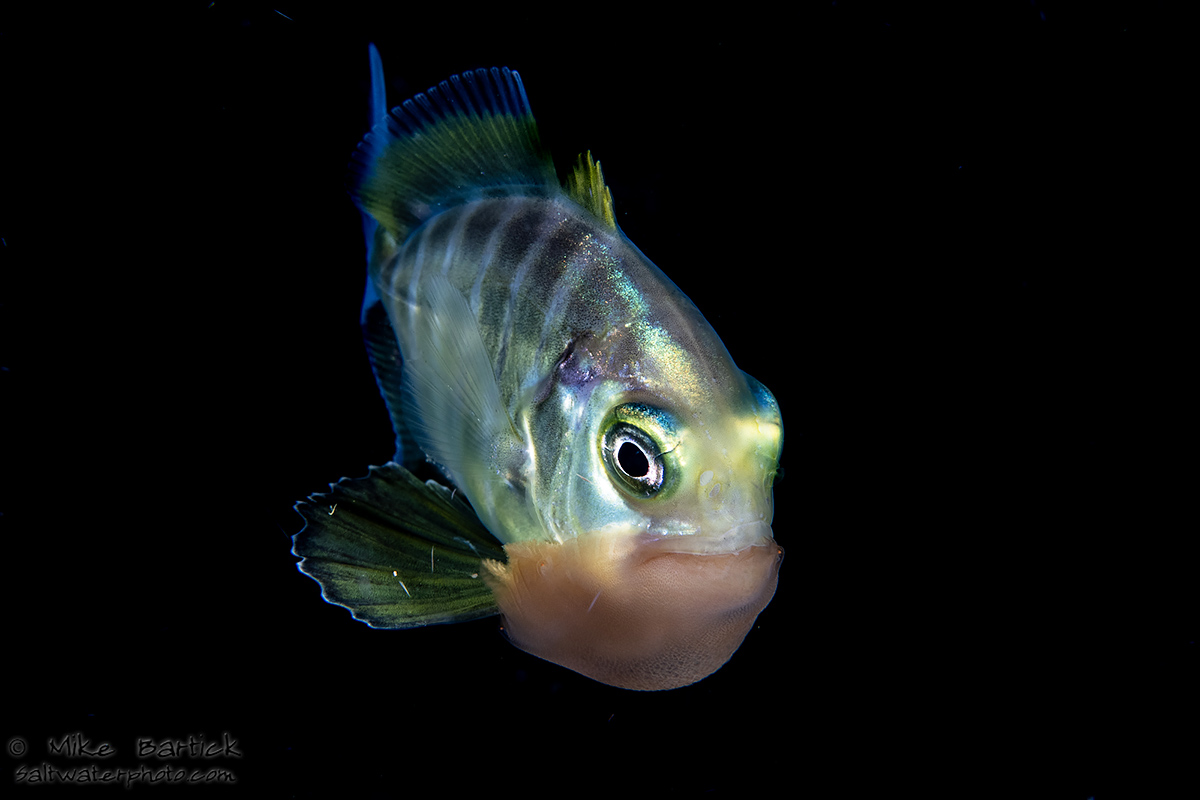 As they grow, the jackfish will steer and guide the jelly through the water. The jellyfish has no brain so the jack does the thinking, while the jelly and its painful stinging tentacles provide protection. 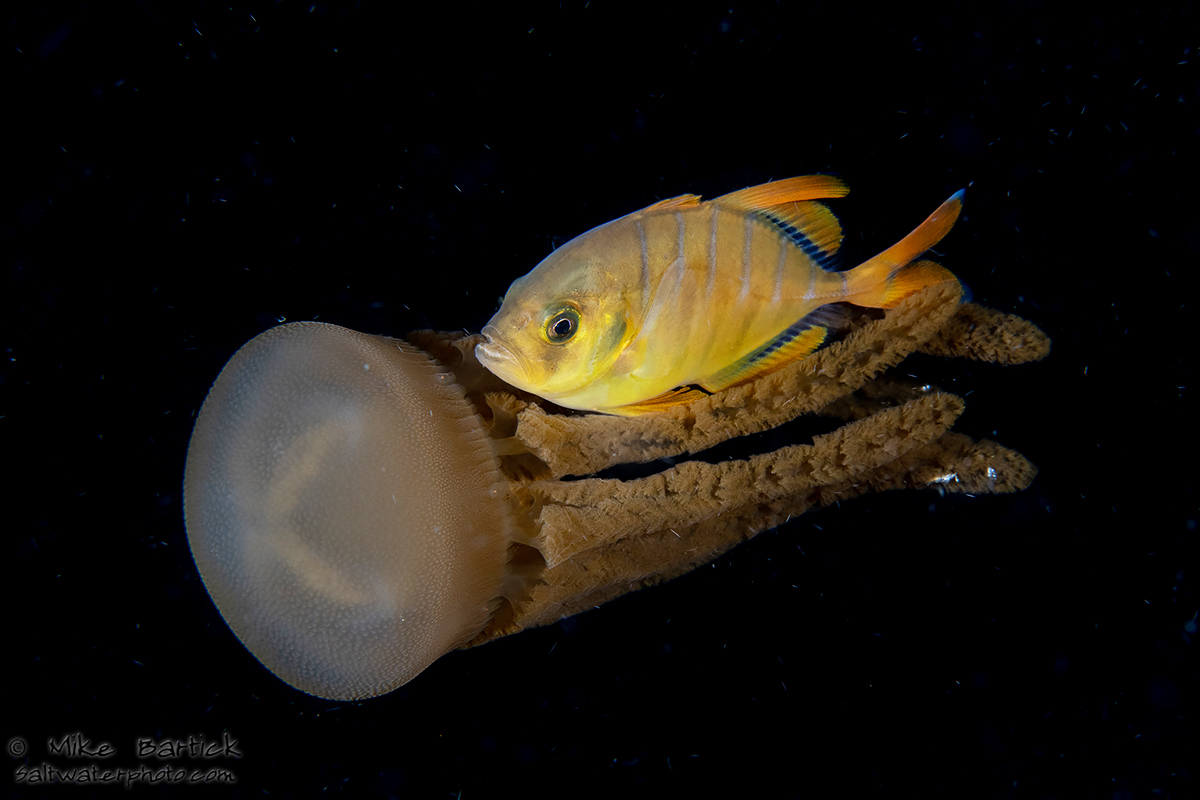 Argonaut Hians -- The Argonaut hians, or paper Nautilus gets its name from the design of the shell. The female of the species creates the shell and uses it as an egg case where she broods her eggs. The male does not form a shell and in one of nature’s most extreme examples of sexual dimorphism, rarely grows larger than a pea. 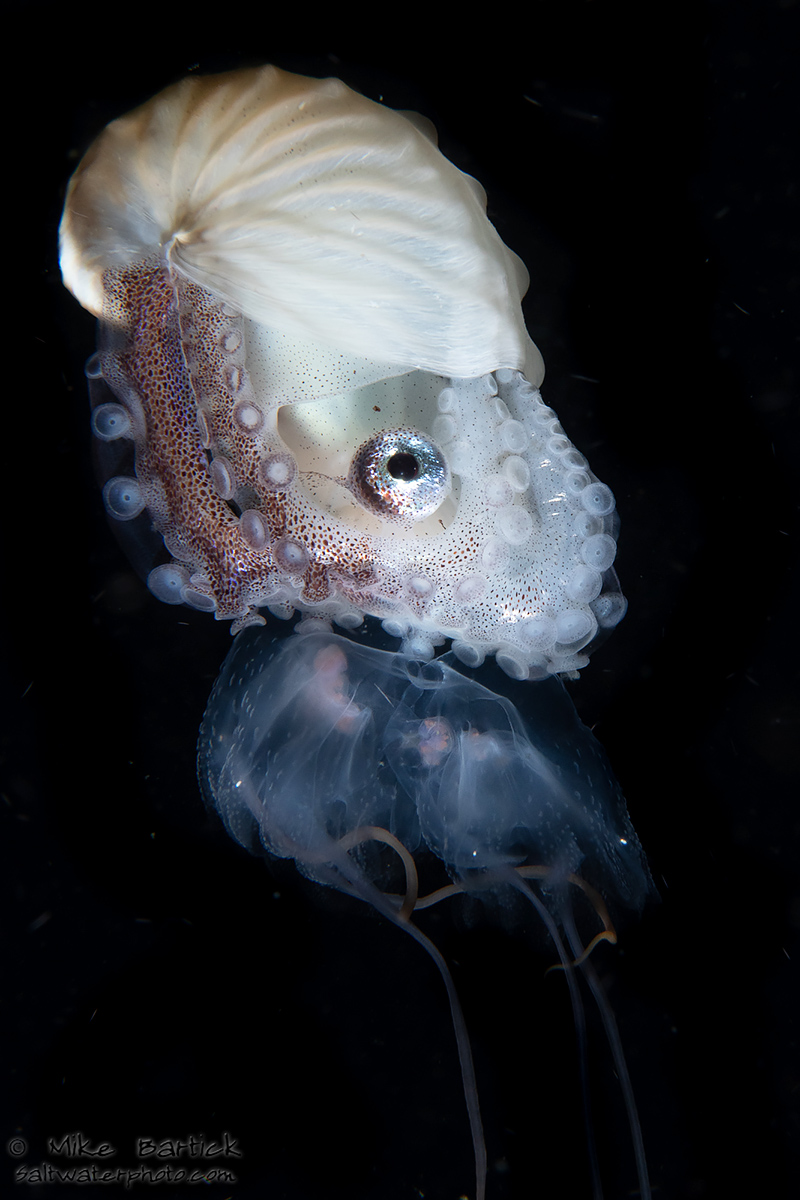 Wunderpuss -- The Wunderpuss photogenicus in its settling larval stage is one of the most exotic subjects you could wish to encounter. Transparent and spending months in the pelagic zone hunting for fish, crustaceans and other small cephalopods prior to settling on the sand. 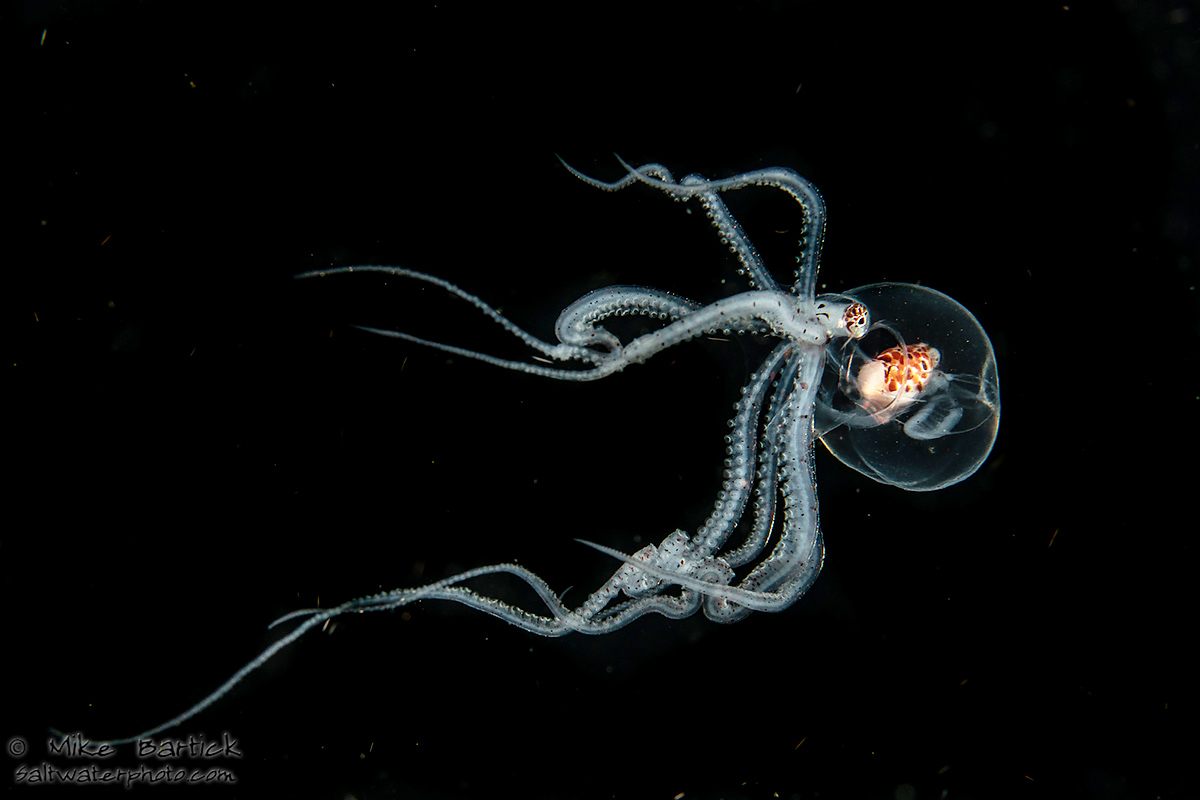 Fu-man Chu -- This flying fish named “Fu-man Chu” because of the nostril tendrils that resemble a mustache. Living and hunting just under the surface, the flying fish can be quite a challenge to photograph. Imagine trying to photograph a butterfly while running down the street and you gain a good idea of what it’s like to capture its image. 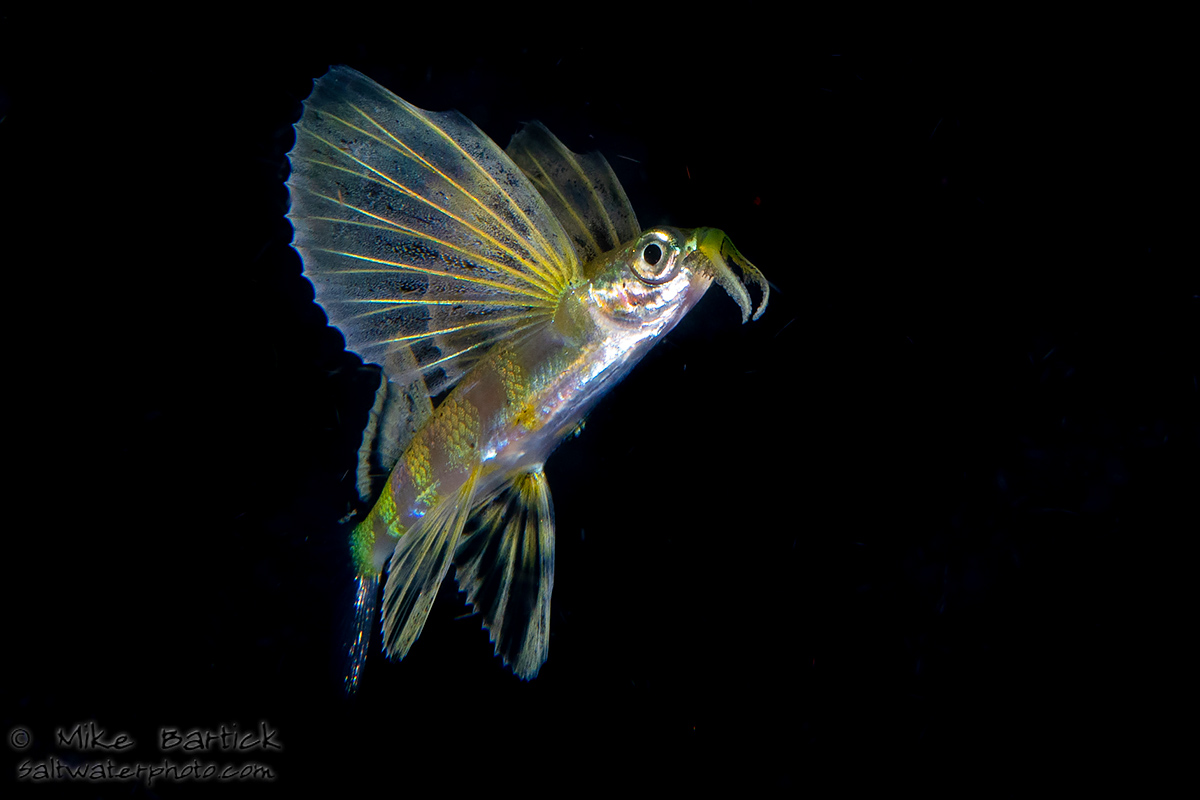 Flounder Larva -- The Flounder larva is colorful and transparent all at the same time. Moving quickly to avoid predation, don’t expect these guys to stand still for long. In this stage of development, the flounder still has an eye of both sides of its head. 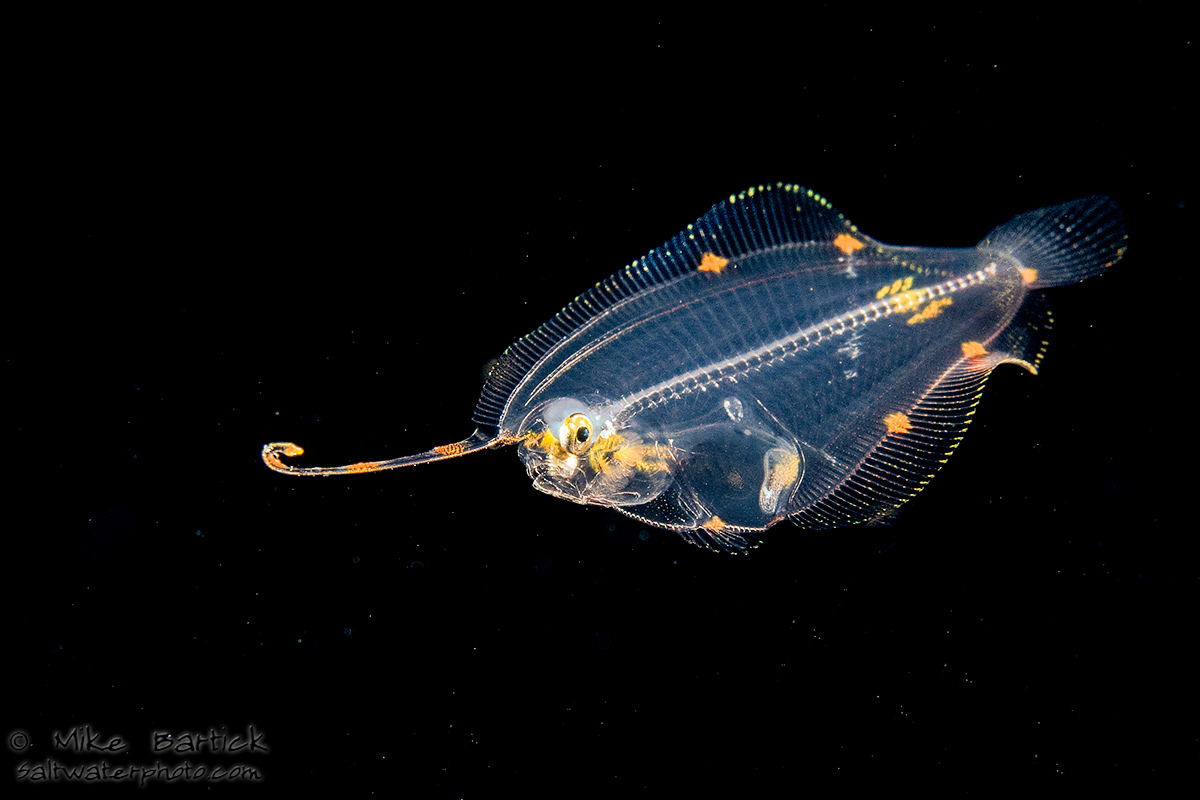 Experience Blackwater Diving for Yourself -- Crystal Blue Resort now offers Blackwater diving to their guests as individual ad on dives or in group packages. The group trips are called “Blackwater Safaris” and operate on a night shift beginning after 8:00PM. Blackwater divers should have an advanced skill set, plenty of regular night dives under their weight belts, and a strong sense of adventure. 60mm lenses are recommended for photographers. A strong torch with a tight beam for hunting is a must. Island Dreams has the details and will help you make the arrangements. 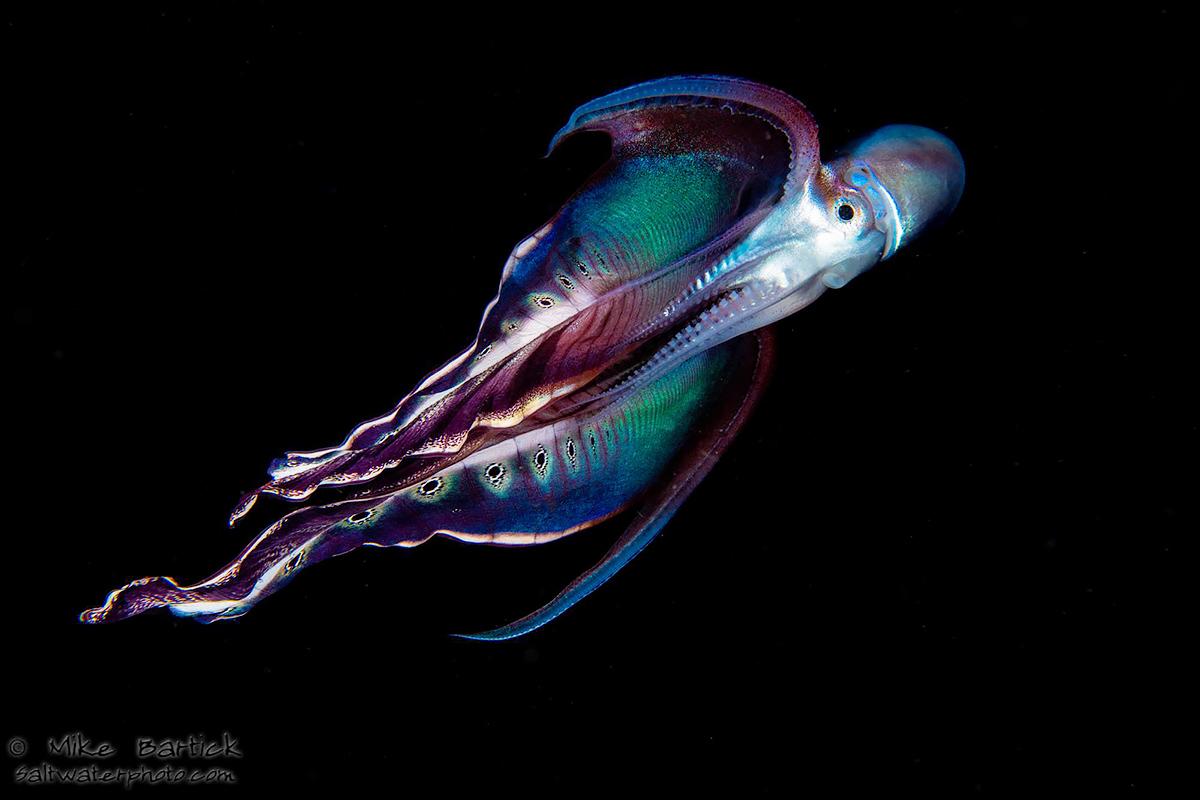