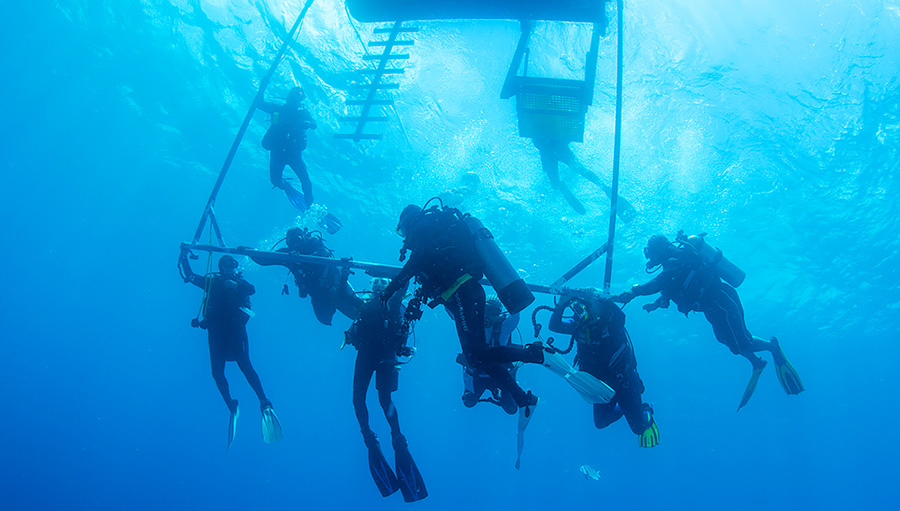 Come aboard M/V Odyssey in the evening, get settled in, and set up scuba gear and camera system. Nice dinner, and all kinds of anticipation for a great week of diving. 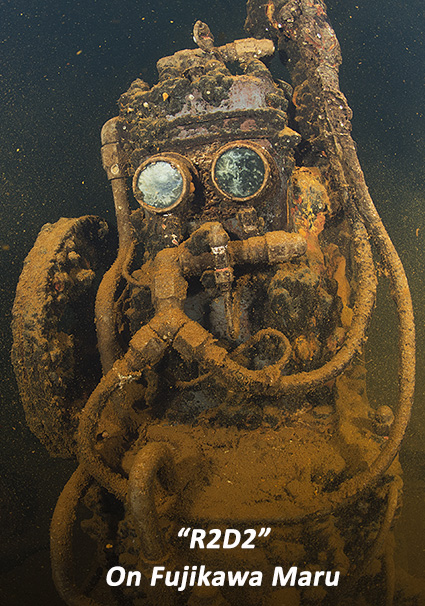 Kiyosumi Maru - Two dives on this 450 feet long freighter, laying on its side. Beautiful growth on the kingposts and forward mast, swarming with blue chromis and forests of soft corals.

Yamagiri Maru - Three dives on the 439 feet long freighter, on its side. 14" bomb shells in the hold, coral-encrusted skull, beautiful swim throughs, huge 4-bladed prop covered in marine life. Swimming out to the end of the forward mast, I found a hanging garden of soft corals swathed in more glass fish than a coral head in Raja Ampat. Other sightings included schooling jack, snapper, mullet, a big sea turtle, and even a black-tip reef shark. Finished this awesome day with an after dinner night dive.

Shinkoku Maru (three dives) -- Three dives on this upright 500-feet long fleet oiler that participated in the attack on Pearl Harbor. Sitting upright in 125 feet of water, with the main deck at 70 feet. After the first dive on the Fumitzuki Destroyer, we moved to anchor over the Shinkoku Maru and "the pool was open" all day. I geared up quickly, jumped in first, and had the bridge all to myself, making my photographs before it got silted up. These ships have now been down 70+ years. The amount of coral growth and marine life on them is astounding. At this point they are host to better soft corals than I've seen on any other coral reef in the world. On Shinkoko Maru I encountered a denser accumulation of glassy sweepers and other baitfish than I have encountered anywhere. This wealth of bait attracts an array of hungry predators, including jacks, rainbow runners, snapper, tuna, and reef sharks. What a diving joy to be anchored over this astounding wreck for a full day, to be dived at will.

Nippo Maru - Made two morning dives on this 353' water and ammo carrier sitting upright in 160 feet of water. 90 feet to the bridge, 120+ in the hold - tank on deck, artillery guns with air still inflating their rubber tires, gas masks, artillery shells, and countless beer and sake bottles.

Heian Maru - Enjoyed two awesome dives on this 510 feet long, passenger and cargo liner converted to a submarine tender. Laying on her side in 110 of water, the huge ship revealed torpedoes, artillery shells, periscopes, and a couple of artifact displays. She is covered in halimeda algae, with small stands of staghorn coral along the rail that faces the surface. There was a turtle down inside the wreck, and a Napoleon Wrasse cruising above. I passed on trying to photograph the turtle, fearing it would go deeper inside the wreck and get lost. 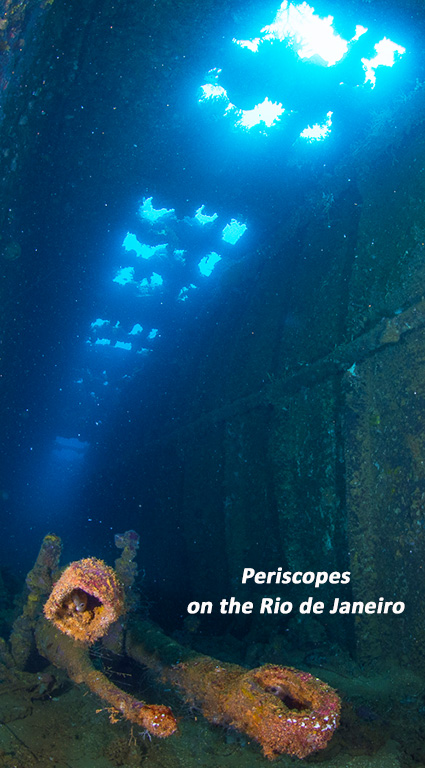 Hoki Mari - Started the day with a single dive on this 450' cargo carrier sitting upright in 155 feet of water. The hold was full of trucks and a bulldozer, and silted up very quickly.

Betty Bomber - We made one dive on this airplane wreck, sitting in 65 feet of water.

Fujikawa Maru - What a joy to have three dives on this 437' long history museum sitting upright in 110 feet of water. At just 55-60 feet to the main deck, and with masts rising to within 15 feet of the surface, this is a wreck to savor. Zero (airplane) in the hold, bow and stern guns, telegraph, all heavily encrusted with sponge and corals. Local guide Peter gave me a private tour of the machine shop, including a visit to see R2D2, a compressor with a passable likeness to the Star Wars character. At one point almost a total loss of visibility, but the guide brought me through. Saw the zeroes in the second hold, but the visibility was also very poor, no hope of photos. Topside, the wreck is completely draped in colorful soft corals and scads of fish. Schools of blue chromis surround life boat davits, wreathing them in a glowing azure halo. Lion fish hovered with their choice of dinner options. Finishing out a perfect day of diving, a night dive on Fujikawa Maru!

Rio de Janeiro - Began the day with two dives on this 461' ship laying on her starboard side in 115 of water. She began as a deluxe ocean liner, sailing the world, but was converted to submarine tender for war duty. Highlights included an immense stern gun, huge propeller, and sake bottles in the aft hold. The bottles are still in their wooden crates, and as the ship rests on its side, they appear to be stacked on the wall. Thus this area has bene dubbed the "wine cellar." While diving, I was imagining what it would have been like to be a passenger aboard this luxury ship when in her prime.

Shark Dive on Pizion Reef - I'm not generally a fan of manufactured marine life encounters, but this one was done very well. Mooring just outside the Lagoon, we were visited by dozens of grey reef sharks, along with hungry snapper, jacks and other fishes. All the dinner guests were very well behaved, though they departed as soon as the snacks were gone. Certainly made for an effective photo opportunity.

Sankisan Maru- This was a 380' freighter, but only 200' of the ship remain to due major bomb damage. She rests upright in 100 feet of water. Booms, truck frames, lots of ammunition, big masts and king post. I would have liked to do a night dive, but that was not permitted for divers planning to do a deep dive on the San Francisco Maru the next morning.

San Francisco Maru - This 385' cargo ship, sitting upright in 200 feet of water, is an iconic Truk Lagoon dive. Highlights include a bow gun, three tanks on deck, hemispherical mines and 1,000-pound bombs, coal, bullets, artillery shells, trucks, torpedoes, and depth charges. My dive maxed out at 181 feet, visiting holds one and two. Photographed the tanks on both sides of the bow area, trucks and armaments in the second hold, munitions in the first hold, the bow gun wreathed in glass fish, and the immense mast on the way up. Diving a custom mix of Nitrox 24, I had 14 minutes of bottom time. Deco debt was two minutes at 20 feet, and 10 minutes at 10. With lots of additional safety stop, total dive time was 50 minutes. An immensely memorable dive that I would love to do again, and again, and again.

Kensho Maru - 375' long freighter, but empty, unloaded and in for repairs. 130 deep at the bow, 90 at stern. Covered in marine life. For safety's sake, divers who did the deep dive on San Francisco only got one dive on Kensho Maru. I left my camera topside and just made this dive as tourist, enjoying the marine life, and reflecting on what a fabulous experience it has been to return to Truk Lagoon.

Following a Continental breakfast, we were off the boat by about 8:30 am. We transferred to Blue Lagoon Resort to await our departing flights. Awesome dive trip! 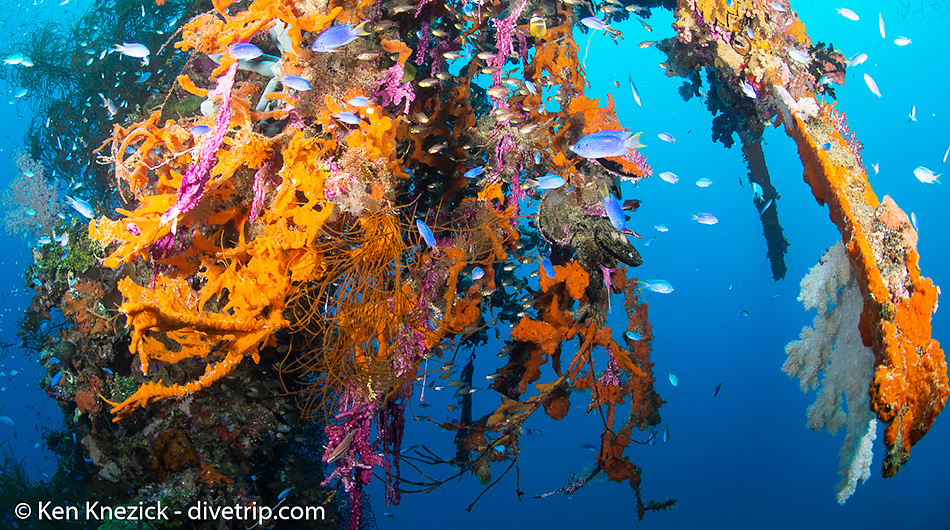 Copyright © 1995-2022, Island Dreams, Inc., dba Island Dreams Travel. All photos, text and design elements on this website are copyrighted. All rights reserved.
Please note that all pricing, airfares, itineraries, descriptions, and trip inclusions represented on this site are subject to change without notice.